So grateful that Jim Irving kindly posted on Linked-In an extract from my piece in his recent publication “The B2B Sales Top Tips Guidebook”…. 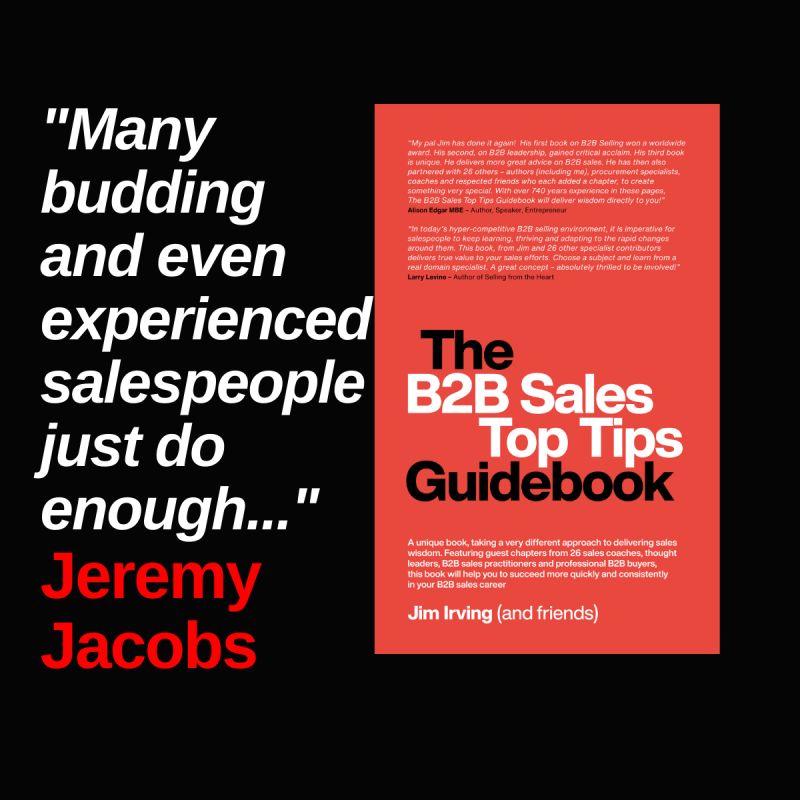 Thanks to the great Jeremy Jacobs for his guest chapter in the B2B Sales Top Tips Guidebook. If you want to exceed target and earn more, this is a must-read!

“The vast majority of the public will have enjoyed taking a walk through a public park or country estate. Occasionally, the perambulation is interrupted by a band of feral pigeons – in a Woody Allen film, they were referred to as “rats with wings” – who seem intent on blocking one’s path. Usually, if you walk tentatively through them they will flap their wings and waddle off out of your and harm’s way. Sometimes they will fly away but more often than not they don’t. Flight takes great effort, both mentally and physically, so the pigeons opt for the easy solution.

The same could be said for sales activity of any type. Many budding and even experienced salespeople just do enough to ensure that quota whether, of revenue, discovery calls or presentations is met. These tend to be the sales guys who bunk off early, don’t gen up on their industry knowledge and fail to find enough time to plan or brush up their sales skills. High flyers seem to achieve more but the average guys, the also-rans and the downright lazy so-and-so’s just don’t go the extra mile. The main reason may be down to a phenomenon called the L.E.P. or Least Effort Principle, sometimes referred to as the principle of least effort. It was first discovered by the French philosopher Guillame Ferrero in 1894. L.E.P. is a theory which suggests that us humans are wired up to carry out tasks with the least effort, or to choose the path of least resistance or effort. But in the sales industry, one can’t afford to be lazy. Mark McCormack, author of “What They Don’t Teach You at Harvard Business School” and a master planner, suggested that to make it in sales – or any other field for that matter – you have to work late, work hard and work smart.

A sister of LEP is the Status Quo Bias. It is one of over one-hundred and fifty currently recognised cognitive biases. The Status Quo Bias comes at you when you hear those fateful words as a territory salesperson from your prospect – “we’ve just bought one” or “we don’t like your brand”. When involved with more complex B2B sales situations, you will often read an e-mail or letter with something like this; “the board has met and has decided that we cannot continue with the project you’ve kindly put forward” followed by a list of ‘reasons’ – some genuine, many aren’t. You should really just consider it as another manifestation of the Status Quo Bias. Behavioural scientists would describe the Status Quo Bias as being ‘if it ain’t broke, don’t fix it’. After all, sticking with what you know is safer, easier and as we’ve learnt it doesn’t require any effort.”

This explanation of two selling and buying behaviours is critical to sales success. Thanks, Jeremy Jacobs!