The Sale Doesn’t Begin Until The Customer Says ‘No’

William Davis, born Gunter Wilhelm Adolf Keese in Hanover in 1933, was clearly an amazing individual.  He wrote many books, including The Super-salesman’s Handbook and It’s No Sin To Be Rich. He presented The Money Programme for BBC2 was editor of Punch magazine and was an advisor to Margaret Thatcher. 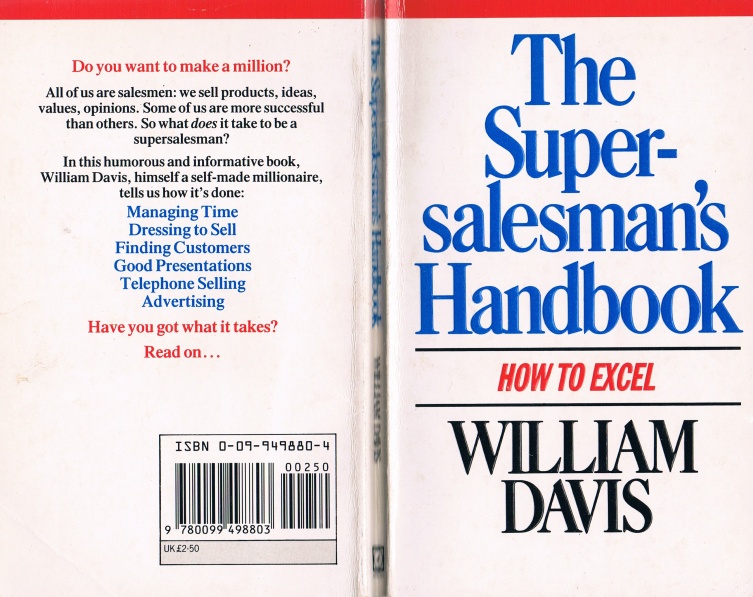 Right at the back of the book is a little multi-choice quiz. It’s called “Have You Got What It Takes“?  It asks the reader some awkward questions about certain sales situations. In all honesty it’s a bit of fun but it can give you an idea of where you need to brush up your skill set. Despite its vintage, the SSH is packed with some seriously useful stuff. There’s a “Looking Right” panel which can be found under ‘Dressing To Sell’. So wonderful to see that smart, well-made shoes; a thin, plain gold watch and Tweed jackets (when selling to farmers) are “in” and Dark glasses, Solid red shirts and socks that show leg when you sit down are all “out”. Times change, values don’t. The same applies to correspondence. William Davis outlines the importance of a good personalised letter sent by post. Funny how things come back into fashion.

As the Super Salesman progresses and achieves the trappings of success, more sophisticated methods of remuneration are required. Taxation can be such a disincentive! William Davis explained the various methods which were in vogue in the 80’s. There are a couple of references to travel by Concorde – if only.

There’s very little in this book which one could describe as bad. For sure, many terms and references are now out of date in the internet age. My only real criticism though is the line “The Sale Doesn’t Begin Until The Customer Says No”. In the context of the 1980’s when this book was published, you could argue that the author is correct. A ‘No’ in those days could mean several things as the writer points out. Those things which we salespeople like to call objections (some genuine, others not), may not have changed – what has changed is our knowledge about the human condition and what drives people to remain at a ‘No’ or the status quo. A ‘No’ is still the path to a ‘Yes’ when handled in a nuanced and subtle way. This renders the old-fashioned ‘getting to yes’ (sometimes at any cost) approach, redundant.

Ugly situations can occur if you don’t heed the advice of the author when it comes to learning about other cultures. From Japanese ambiguity to German formality, one must research foreign lands and their customs before undertaking selling internationally.

There’s nothing ugly about being in sales and I admire people who sell stuff to others they don’t need. William Davis asks the reader if they remember the Pet Rock? The man who marketed a box of pet rocks was making $10,000 a day. Not bad for a painted pebble that sits in the bottom of a goldfish bowl. That and the millions made by those who invented the ‘flower power’ car stickers in the late 60’s and early 70’s just proves that there’s money to be made in almost anything – particularly in a recession.