Pick Up, Fix Up, Hang Up

One of my favourite sales books is Stephen Schiffman’s ‘Cold Calling Techniques’. First published in 1987, this week’s review looks at the 7th version which came out in 2014. This book is a great ‘how to do it” manual and one I’d personally recommend to budding salespeople and some more experienced folk too! By the way, Pick Up, Fix Up, Hang Up was the shibboleth of sales trainers and managers in the 80’s and 90’s. 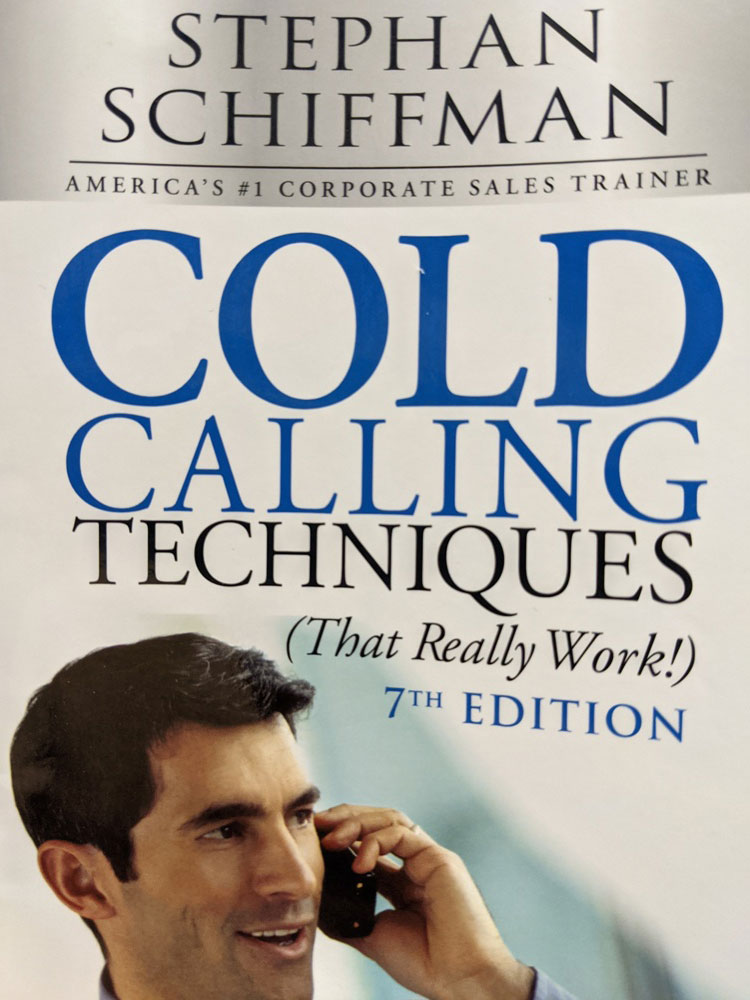 There is so much good stuff in version 7 I could wax lyrical about it for pages and pages. I love the preface to this particular edition. Schiffman highlights difficulties of the US economy post the 2008 banking crisis and makes reference to another one of his publications Selling When No One Is Buying and we find ourselves in a similar situation today with COVID-19. Schiffman highlights three points 1. Cold Call 2. Do more preparation and 3. Be positive! We’ve all seen similar pronouncements in relation to the latest crisis and yet people are reluctant to take the first step – cold calling. Another obvious step is to practice the things you are going to say, or as the author writes drill the techniques repeatedly.

The most striking thing as far as I’m concerned comes as early as Page 20 where Schiffman mentions the Status Quo – which is the biggest competitor any salesperson will face.  (I explain the Status Quo or SQB on this site) The second most striking thing was the timing of calls – no not the tone and cadence of your lovely voice but the time you call actually call a customer. The author explains the benefits of cold calling between 7.30 and 8.30 each morning – now that’s in the States where it’s half-expected but in the UK?

Schiffman does a good job in when he illustrates “do you know your numbers”?  Do you know yours? How many calls do you make each week? How many conversations did you complete? And how many appointments did you fix up? And so on.

Right towards the back of the book there’s an appendix with some sample telephone scripts. But there’s only three. This is terrible. When I was once handed a telephone sales scripts on a double-sided plastic piece of perspex, there were at least five scripts and various answers to objections too.

Nice piece of up-selling (and why not) in one of the latter chapters. According to Schiffman there are four steps in the sales process with the last, as you would expect, is the close. He refers the reader to one of his other erudite publications Closing Techniques (That Really Work!)  – no doubt that’ll make an appearance on here later this year.

CCT is full of useful reminders. Two of the best are the passages on leaving voicemail messages and the scourge of many a salesperson, telephone tag.  The latter is enough to drive one crazy and yet it happens all too frequently. Reading through Chapter 8 ‘Leaving Messages That Get Results’ was a joy.

In the Introduction, Schiffman writes “Cold Calling Techniques is now entering its seventh edition. It’s been translated into over a dozen languages…….It’s sold many hundreds of thousands of copies. It’s been cited repeatedly as one of the most important sales-related books ever written.” It’s hard to disagree with that!

TheSalesRainmaker
@Sales_Rainmaker
RT @Alexmathers84: If you want to be more disciplined, do these 4 things: (I'm serious - this will change your life)

TheSalesRainmaker
@Sales_Rainmaker
RT @Alexmathers84: If you want to be more disciplined, do these 4 things: (I'm serious - this will change your life)